It's very probable that there's no rider who doesn't fantasize about his own horse. A horse running form pasture directly to you as soon as it sees you, because it knows that you and you alone always carry his carrots in your pocket...

Let's talk about horse psychology, just so you get an idea about what is to be expected on this path named "owning your horse". When you keep horses like I do, free all year round, you realize what's important to them and what do they throughout the day. Horses are most interested in food (they spend 16 hours daily just eating), then sex, lucky for you, it's only once a year :)), then they put much thought in hierarchy. It's very important for an average horse to get out of the stronger horse's way and to pick on those weaker than himself. Horses have their friends and their enemies. And they constantly try to improve their hierarchical position. Horses do it with other horses and with riders. If you don't respond with a scandal to horse's tries to impose on you, a fairytale will soon turn to hell.

The female part of population shares this collective illusion that goes something like this - if I cuddle my horse, feed it with carrots and love it very much nad bathe it every day with scented perfumes and similar nonsense, then it'll love me too, and carry me on it's back. Right. The truth is as follows. If you wait all the time for a horse to make a mistake to get the chance to pick on it (for example, you give it a clear signal to go througa a puddle, and it goes around it, then you should make it go through it not once but three times and if possible, make it stay in that puddle until you give it a command to go out), then a horse will recognize you as a stronger person and obey you blindly.

The bad side of having horses is that you have to force them in everything, the good side is that you can force them on anything. With a weak (in a psychological sense) rider, a horse won't go through a puddle, but the same horse would jump off a building with a strong willed rider, and after they've both looked over the edge how far is the ground. So, the magick formula is first to force a horse and harass it for every try to impose on you, and when it's good and obedient, then you get to reward it with apples or carrots because they love to eat most, altough massage gives good ressults too. 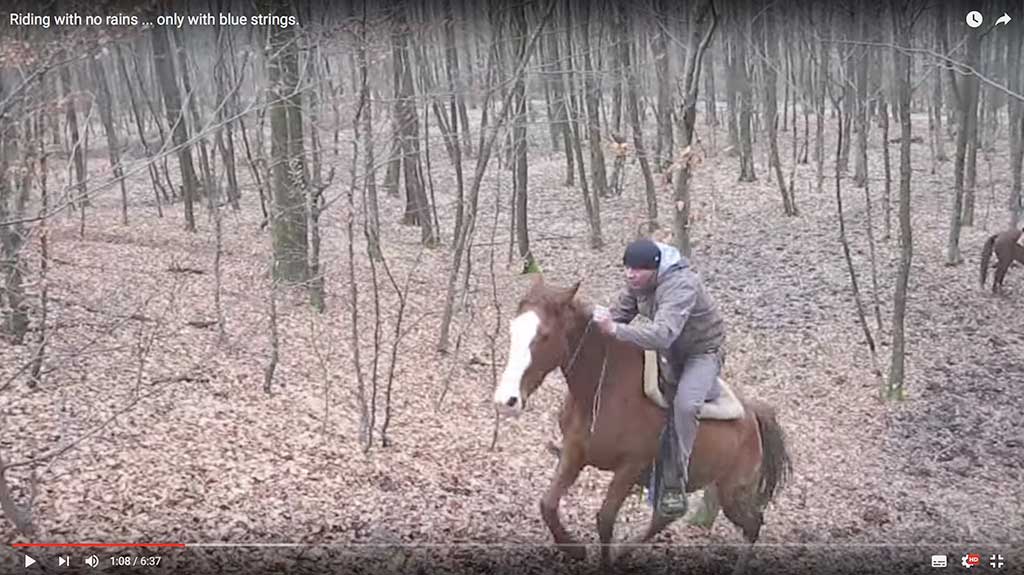 You have a question? Great, ask me or on the forum and we'll publish it in the FAQ. Do you want to receive Geronimo news? Register at Geronimo...

There are club facilities in the old oak house. You may smoke inside if no one objects, there are no children and it's not too cold to open the...

Riding school Geronimo working days are Tuesday, Thursday, Saturday and Sunday by prior notice. A riding class (45 minutes) costs 100 kn, and there...

It's god to feed horses by hand, because that way you increase it's trust in you. Nevertheless, there are some rules. You feed a horse separately from...

The advantages are as follows. Already after 4 riding classes since your first contact with a horse, you'll be riding in the forest outside paths and...

About all sorts of things ...
5 years ago

Riding without an instructor is not usual at Geronimo. As exception, to the riders who have proven that they know how to keep themselves and their...

About all sorts of things ...
5 years ago

Undersaddles, brushes and reins are strictly forbiddenfor use at different clubs because of possible contagion with various diseases. You can use...

Old croatian oak house is is refurbished to meet our needs. If you have a favorite CD, feel free to bring it with you, you can play it on a brand...

There are some big differences between those riding styles for both horse and a rider. Let's start with the differences for a horse. "English" claim...

Further trail rides will strengthen the gallop the same way the previous ones strengthened trotting. You may have thought what do I mean by further...

The second part is a real pleasure. Everyone is riding his own horse in the surrounding forests. Mostly, we ride off the trail and through the...

Our mission is to teach you how to gallop. I've prefected a method with which I've taught everybody so far, in 30 minutes, the basics of sitting...

I think that the fastest and best way to learn to ride is to independently ride as much as possible in the nature (accompanied by the instructor)...